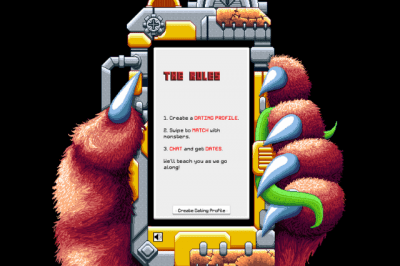 Dating apps are the #1 way people meet and hook up these days.  But if you’ve been using an app like Tinder for a couple of years now, you may have noticed that you see what it feels like are the same user profiles being recycled.  Or maybe you feel like your profile never gets noticed and you’ve been done an injustice. Well, Benjamin Berman has created an online dating app game to expose the truth about collaborative filtering- the algorithm behind dating apps.

You’re probably wondering what collaborative filtering is.  It’s the same dreaded algorithm that Facebook and Instagram use.  The one we all hate when they roll out an update and our feeds are a disaster and they didn’t even ask our opinion (so rude).  It powers recommendations for engines like Netflix and Amazon. So next time you’re on Netflix and it says Recommended because you watched Law & Order SVU or Amazon is showing you bundling recommendations based on what you are about to put in your cart…thank collaborative filtering.

It takes the behavior of one user and makes decisions for a later user based on similarities in initial interactions.  What ends up happening in online dating sites is specific groups of people are being left out of the matching process altogether based on some initial users swiping left.  Black women are amongst online dating users who are least likely to get matched. Because of this niche dating sites like JDate and Grinder have erupted. However, these niche sites are powered by the same technology so users with uncommon characteristics are still left behind.

The dating game that will scare you when it exposes the truth behind collaborative filtering and educate users behind the algorithm.  Monster Match, not to be confused with the Monster Mash, is an online game where you create a monster avatar. You can choose from humanoids to creatures and build them from scratch.  No real photos are used in the game or the swiping process.  So you’ll need to get creative with your monster parts. I chose to be a spider and named my avatar Lady Long Legs. You can create your own avatar here.

I swiped through the first few profiles of avatars and some were funny and some were a hard no.  Within the first 5 swipes the game stopped to let me know it had already developed the algorithm. And was going to use the exact one that dating apps use to continue showing my profiles.  About 10 swipes later, it stopped to show me who they weren’t going to show me. Based on my swiping and who I was most likely to match with. I was bummed because a couple of the avatar profiles that the algorithm had decided against being my monster love. We could have made interspecies creatures, they totally looked cool and I would’ve swiped right.  I did match with a creature who was a farmer making farm to table vegan blood for vampires.

The algorithm is sabotaging our online dating experiences. If the algorithm automatically cuts out half the users from showing up in your matches, for Tinder that would be over 4 million people.  With apps like Tinder, Ok Cupid, Match.com, Plenty of Fish, Grinder, and Bumble all using this collaborative filtering algorithm you have to wonder are they really helping you to find love?

The Future For Online Dating

While Monster Match is just a game, co-creator Benjamin Berman has some ideas of how to improve the way online and app-based dating experiences work.  He suggested an opt-out button that lets you turn off the recommended algorithm so that you match randomly. Berman also suggested modeling dating apps after games with quests to go on with a potential date.

I know as someone who is attracted to unique people and doesn’t have a “type” I certainly don’t want an algorithm making decisions for me on who’s going to show up in my feed.  Paid or free, the experience should be helping me to find love, not limiting my options. I’m with Berman, let us opt-out and decide for ourselves.

Related: Online Dating Red Flags: What To Notice Before You Meet